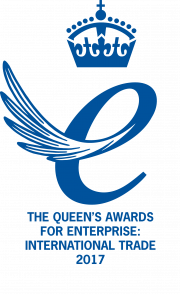 NEWPORT,UNITED KINGDOM | SPTS Technologies, an Orbotech company and a supplier of advanced wafer processing solutions for the global semiconductor and related industries, proudly announced today that it has been awarded the coveted Queen’s Award for Enterprise in International Trade 2017. The award recognizes SPTS’s substantial year-on-year growth in overseas earnings and commercial successes in its global business. In addition to judging outstanding achievement in international trade, the judging panel also assessed SPTS’s on its corporate responsibility, which included employee affairs, customers and suppliers relationships, and its impact on the environment and society.
“We are extremely proud to be recognized with the Queen’s Award for Enterprise in International Trade for the second time,” stated Kevin Crofton, President of SPTS Technologies and Corporate Vice President at Orbotech. “We have a global organization of dedicated employees that makes our international business possible. This award belongs to the entire organization – from those involved in the development and manufacture of our industry leading wafer processing solutions to our team outside the UK who sell, install and support our products and customers. Our customers are many of the leading device manufacturers in the microelectronics industry, who rely on us day in and day out to perform and help them be successful. Our growth is a testament to the quality and competitiveness of UK developed technologies and products in the global markets.”
Economy Secretary, Ken Skates said: “Huge congratulations to SPTS Technologies on their second Queen’s Award for Enterprise. They are a prominent global business that makes an important contributionto our economy which is why we have awarded them Anchor status.”
“I am so pleased SPTS’s growth in overseas earnings and its continuing commercial success have been recognized once again by this prestigious award. A focus on exporting is more important now than ever before as we transition out of the EU, and success stories such as this show that companies in Wales can more than step up to the challenge.”
The Queen’s Awards for Enterprise are the UK’s most prestigious business awards, given only to companies
or individuals who are outstanding in their field. Previously known as the Queen’s Awards to Industry, the first Awards were given in 1966.
Headquartered in Newport, Wales, SPTS Technologies exports more than 95% of its products manufactured in the UK and has surpassed its £1 Billion in export sales milestone. SPTS has manufacturing facilities in Newport (UK), Allentown (USA, Pennsylvania), San Jose (USA, California), and operates across 19 countries in Europe, North America and Asia-Pacific.
About the Award
The Queen’s Awards for Enterprise were introduced in 1966 to acknowledge businesses with outstanding performance in three categories – International Trade, Innovation and Sustainable Development. The awards are open to any company operating in the UK and are announced annually on 21 April, The Queen’s birthday. The awards are made annually by Her Majesty The Queen, and are awarded to companies with the highest levels of excellence demonstrated in each category.
About Orbotech Ltd.
Orbotech Ltd. (NASDAQ:ORBK) is a global innovator of enabling technologies used in the manufacture of the world’s most sophisticated consumer and industrial products throughout the electronics and adjacent industries. Orbotech is a leading provider of yield enhancement and production solutions for electronics reading, writing and connecting, used by manufacturers of printed circuit boards, flat panel displays, advanced packaging, micro-electro-mechanical systems (MEMS), RF devices, power semiconductors, and other electronic components. Orbotech’s solutions include automated optical inspection and shaping, direct imaging, laser drilling, Inkjet printing, array test and repair, yield management, and etch and deposition wafer process solutions.
Today, virtually every electronic device in the world is produced using Orbotech systems. For more information, visit www.orbotech.com and www.spts.com
COMPANY CONTACTS:
Destanie Clarke
Senior Director, Marketing Communications
SPTS Technologies
Tel: +44 7951 203278
Destanie.Clarke@orbotech.com
Tally Kaplan Porat
Director of Corporate Marketing
Orbotech Ltd.
Tel: +972 8 942 3603
Tally.KaplanPorat@orbotech.com