MVD® platforms allow for the use of up to four precursors, and can process multiple wafers or other three-dimensional objects in a single batch.

Benefits of MVD for MEMS

Improved Device Reliability
With MVD®, manufacturers can achieve exceptional film uniformity with industry-leading reliability — advantages that maximize manufacturing yields and reduce overall costs. Device performance is also greatly improved, especially in many MEMS applications. For example, with MVD-deposited anti-stiction films, failure rates for microphones shrank from 14 percent to 0.4 percent, while the failure rate for accelerometers dropped from 40 percent to less than 5 percent. 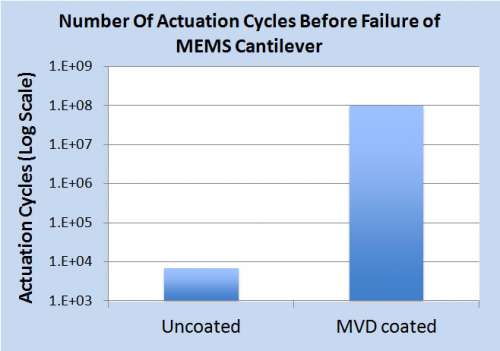 Superior Films for MEMS Process Challenges
SPTS has developed a multitude of both organic and inorganic films, which when used singly or as multilayer laminates provide wide ranging solutions for the diverse process requirements in MEMS manufacturing.  Issues such as thermal stability during higher temperature wafer bonding, water contact or oil contact angle, film durability and adhesion to substrates utilizing diverse materials can be traded off and optimized by choosing the right chemistry for the challenges of a particular MEMS device.

Operating in the vapor phase, MVD® is a superior alternative to traditional liquid-based methods for growing ultra-thin protective films. MVD® delivers extremely high conformality on aggressive aspect ratios of up to 2000:1.

With feature sizes shrinking faster than the pace of progress for conventional deposition tools, MVD® presents a completely new approach. Unburdened by legacy technologies, the platform has been engineered by our team of thin-film deposition experts and built specifically to meet the aggressive performance specs for today’s advanced devices.

Flexible, Low CoO Operation
The MVD® platform is versatile, easy-to-use and highly scalable. In addition, the learning curve is light, which is a benefit valued by customers who deploy the system for multiple applications. The ultra-low cost-of-ownership is due to the tool’s inherent efficiencies, and is further enabled by its very low precursor consumption. Also, by consuming only milligram levels of precursor per run, and requiring nearly zero point-of-use exhaust treatment, it’s greener than most CVD deposition techniques.

The MVD100E is the designated tool for R&D or pilot manufacturing for single wafers or small batches , with a low volume  chamber for fast processing. It is designed for high performance, flexibility and reliability for the most demanding applications. It can process 200mm wafers or components on trays using up to 4 precursors.

The MVD300, MVD300L with a load port, and MVD300E with an EFEM, are designed for high performance, flexibility and reliability for the most demanding high volume manufacturing applications. They provide a range of handling options for 200mm or 300mm wafers, singulated die on tape frames, or components on trays. Up to 4 precursors can be utilized.