Newport, United Kingdom – SPTS Technologies, an Orbotech company, and a supplier of advanced wafer processing solutions for the global semiconductor industry and related markets, was named MEMS/Sensors Supplier of the Year at the MEMS Executive Congress U.S. 2014, held in Scottsdale, Arizona. In addition, Kevin Crofton, President – SPTS Technologies & Corporate VP – Orbotech, was voted as the runner-up in the “MEMS Executive of the Year” award category.

MEMS Supplier of the Year Award 2014 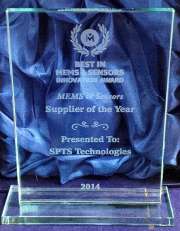 “We are really pleased to have won this category for the second year running,” said Kevin Crofton. “Our product and technical teams work hard to push the boundaries of all these key processes which contribute to the manufacturing and commercial success of a wide variety of MEMS devices. This award is especially important as we were selected by an industry-wide vote, and it acknowledges our contribution to the MEMS industry.”