MEMS Microphones - What's All The Noise About?

The market for MEMS microphones has been growing rapidly in recent years for a variety of applications, primarily mobile devices, but also other products such as hearing aids, Bluetooth headsets, “digital assistants” (like Amazon Echo / Google Home) and increasingly in cars.  According to Yole Développement[1], the consumer MEMS microphone market is expected to be worth $1.5B in 2024, up from $1.1B in 2019, with the largest growth forecast to be in smart speakers (13% CAGR) and wireless earbuds (29% CAGR). Microphones in smartphones today do more than simply capture voice for transmission. They also serve as audio sensors in a very low power mode to support voice activation, and they provide high quality audio when the phone is used for video recording. Beyond smartphones and digital assistants, applications in automotive may include infotainment and communication systems, voice commands, noise cancellation and safety features[2].

Compared to traditional Electret Condenser Microphones (ECM), MEMS microphones offer a smaller footprint/thickness, a higher signal to noise ratio (SNR) than an ECM of an equivalent size, lower power consumption and are easier to package in an automated PCB assembly, unlike ECM. Their reduced size allows arrays of multiple MEMS microphones to be used in small products like mobile phones or Bluetooth headsets to recognize sound directionality and most importantly to provide noise cancellation capability. Silicon MEMS microphones also offer greater immunity to radio-frequency interference (RFI) and electromagnetic interference (EMI), and they can withstand the high temperatures of a surface-mount technology (SMT) process. With a low mass of the diaphragm a MEMS microphone is far less sensitive to vibrations/mechanical shock than an ECM[2].

The dual back-plate design[3] produces a differential (compared to single-ended) output, which minimizes distortion due to its symmetrical construction. A differential element is also more readily managed through the audio processing chain, which potentially reduces power requirements for the accompanying ASIC. It also reduces RF interference, resulting in fewer signal processing steps.

At ECTC2019, Infineon presented a fully functioning single membrane MEMS microphone within a fan-out e-WLB (embedded Wafer Level Ball Grid Array) package - an important step in miniaturization and cost-effective integration with other chips in a single package[4].  In the same year they also released a new microphone design which consisted of one plate between two membranes which improves the Signal-to-Noise Ratio (SNR) even further and provides better protection against water ingress or particles.

A piezoMEMS microphone uses the piezoelectric effect of specific materials, such as aluminium nitride (AlN), which generates an electrical signal when the diaphragm made of such material is deformed by a sound wave. 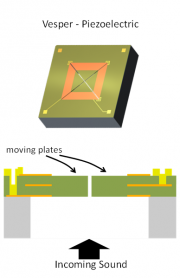 Finally, the leading piezoMEMS microphone manufacturer, Vesper, explains[5] that to achieve accurate wake word recognition, capacitive microphones are continuously running Voice Activity Detect (VAD) algorithms to listen for the wake word (e.g. “Alexa” or “Siri”).  As an alternative, a single piezoMEMS microphone, using a tiny fraction of the power, can be used to trigger the voice system-on-a-chip (SoC) or microcontroller (MCU) which then wakes up the other digital microphones in the array to capture the wake word.  This solution can save significant battery power, although all the other microphones also need to be fast-acting so they don’t miss the first part of the wake word and cause recognition errors. This opens up a lot of new applications where a constant power drain makes voice-control impractical in battery powered devices, particularly in applications such as wearable devices, where space for a large battery is not available. 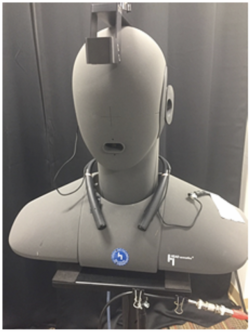 With the evolution of smartphones and many new voice-activated products, the demand for smaller, energy-efficient microphones is expected to continue to grow rapidly over the next few years.  SPTS’s etch and deposition technologies offer makers of both capacitive and piezo-based MEMS microphones the process capabilities they require throughout the production process.

*FWHM = Full Width Half Maximum – This is a measure of the spread of x-ray diffraction (XRD) from a sample. A perfect crystal will produce a very sharp peak (i.e a very low FWHM), while defects like dislocations, mis-aligned grains and curvature due to non-uniform deposition, will result in a broader XRD curve and a higher FWHM

MEMS microphones have been growing rapidly in recent years for a variety of applications, primarily mobile devices, but also other products such as hearing aids, Bluetooth headsets, and “digital assistants”.

Piezoelectric properties of AlN to convert mechanical strain into an electric signal, or vice versa is being exploited in devices such as RF filters and a growing number of MEMS.