Increasingly, many MEMS devices, such as microsensors, require a vacuum or controlled atmosphere for operation. This could be used to control parameters such as the Q-factor (amount of damping), or to provide a reference vacuum for pressure sensors, or to reduce absorption in infrared sensors and improve sensitivity and resolution. Two such examples of wafer level packaging are silicon capping and thin film encapsulation, each providing benefits for specific packaging applications.

One common method of packaging micromachined devices is to bond a silicon cap wafer to the device wafer. This can be used for multiple sensors on the same die, utilizes metal-eutectic bonding and requires less bonding area than traditional glass frit capping. Through silicon vias (TSVs) can be used instead of I/O pads – further reducing form factor size.

The technique uses a double sacrificial layer (normally silicon or silicon oxide) which supports the MEMS structure and defines a space above the structure while a cap layer is deposited over the device layer (Fig.s 2 & 3). 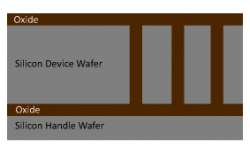 Holes in the capping layer allow an etchant (e.g vapor HF or XeF2 depending on the sacrificial material) to remove the sacrificial layer and “release” the moving MEMS structure (see Fig 4 & 5). 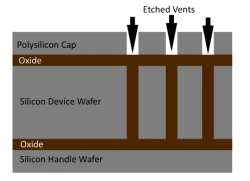 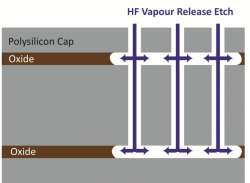 These holes must then be closed by depositing a final sealing layer. Typical sealing materials include epi- or LPCVD PolySi , PECVD SiOx or SiNy or metals such as aluminium (Fig. 6) 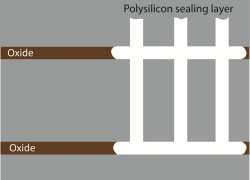 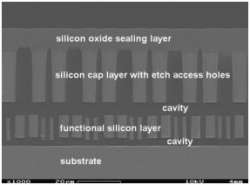 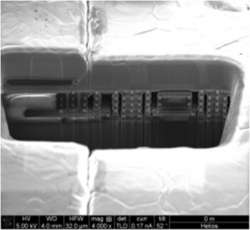 Ideally, the device package should be sealed without removing the wafer from vacuum, to avoid yield or performance loss from unwanted absorption of contaminating gases or moisture. Different MEMS devices require different cavity pressures, and the required pressure/gas composition can be tailored prior to sealing. Stress, temperature and vacuum requirements will determine optimum sealing material.

Wafer level packaging (WLP) prior to wafer dicing of MEMS devices can provide protection from particles and dicing slurry, while significantly reducing form factor and reducing the overall die cost.